Published on 27 July 2018 On Uncategorized 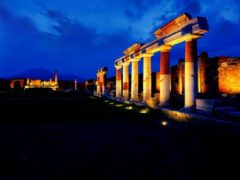 VESUVIAN ARCHAEOLOGICAL SITES, NIGHTTIME WALKS
Pompeii, Oplontis, The Antiquarium of Boscoreale from the 27th July until the 28th September : on Fridays and Saturdays – from 20:30 to 23:00 (last entrance 22:30)

From Friday 27th until 28th September the illuminated routes of the Vesuvian archaeological sites return, as part of the 2018 development projects promoted by the Ministry for Cultural Heritage and Activities.The site of Pompeii, the Villa of Poppaea at Oplontis, the Antiquarium of Boscoreale and, for the first time, the Villa S. Marco at Stabiae will be illuminated on Friday and Saturday evenings.

AT POMPEII the nighttime walks will involve on of the most monumental features of the site – the area of the Forum, the heart of political, religious and economic life of the ancient city, through an itinerary of lights and sounds which will begin from the Porta Marina. The splendour and beauty of the illuminated temples and other buildings, along with the chance to relive moments from the daily life of the ancient city through voices, noises and sounds, will accompany the visitor along their discovery of history. From the Porta Marina, passing the Suburban Baths, just outside the city walls and the entry from Via del Mare, the shouts and activities of artisans and workers from the workshops of Via Marina (the bakery and Furius’ shop), the noises and chatter of the landlady in the House of Triptolemus, the sounds and voices which accompany and tell of the ludi (games) in honour of Apollo in the Sanctuary of the same name, and the rhythm of the drums and music of the sacred cult ceremonies for the Supreme Jupiter at the Capitolium (or Temple of Jupiter), the confusion of the Market (the Macellum) and the activities of the fullones (the launderers) at the Building of Eumachia will mark the stages of this journey into the past. After the Basilica, the ancient Palace of Justice, the itinerary concludes, leaving from the Temple of Venus, with a visit to the Antiquarium and the finds displayed in the current exhibitions.

AT OPLONTIS the nighttime visits will include the Villa of Poppaea, one of the most magnificent examples of a Roman aristocratic villa, attributed to Poppaea Sabina, wife of the Emperor Nero, and the ANTIQUARIUM OF BOSCOREALE, with its displayed finds, which attest to the life and setting of the Roman age in the Vesuvian countryside, and will cost €2.

Starting in September, the nighttime visits to POMPEII will expand, with musical performances on the terrace of the Antiquarium, organised in collaboration with Scabec – Campania Region as part of the Campania by Night project. There will also be musical and atmospheric nighttime performances by Campania by Night at OPLONTIS and the ANTIQUARIUM of BOSCOREALE.

Access to the nighttime visits will not require a booking.